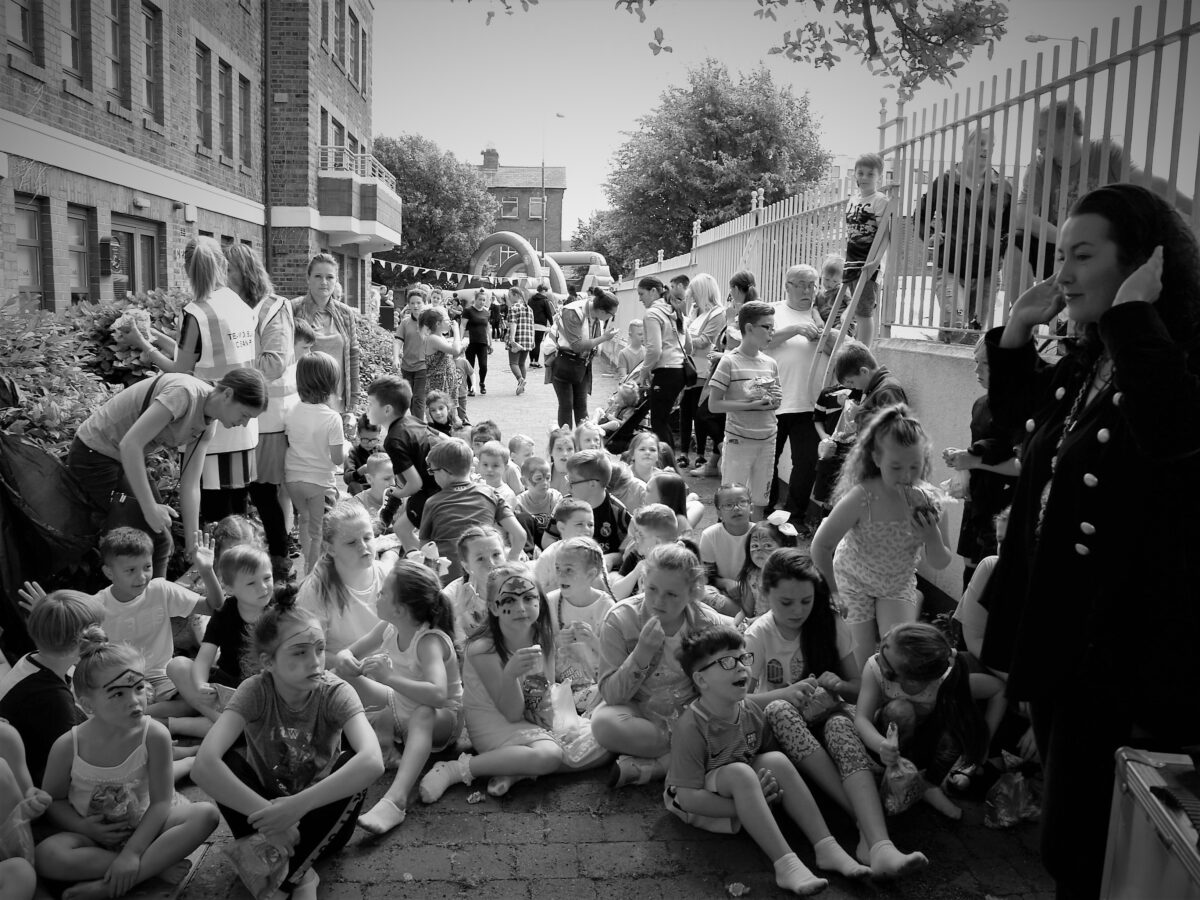 With the help of a lot of community organisations and people, we hosted a hugely successful street party – it was amazing craic! The sun was out, the food was great, and the families had a great time.  Most graciously, Peter Murtagh gave us a tremendous write-up in the Irish Times on Wednesday, 9th August, Online and in Thursday’s (10th August 2017) print edition.

“There are about 75 children, most in the toddler to young teen age bracket, shepherded by about 20 volunteers in high-vis vests.

The children spring through an elongated bouncy castle, have their faces painted, play hopscotch, generally mess about and have a good feed of chips and burgers and nuggets and curry sauce and fizzy drink.”

We were expecting around 100 guests, but as the day went on the event grew as more and more families came down and took part. Of the nearly 300 meals provided, 151 of them were kids’ meals. Circuit Catering‘s Burger Deli service was second to none. The immaculately clean food truck dished out a wide variety of chipper food – beef & chicken burgers, chicken nuggets, hot dogs, and chips with or without toppings – that the crowd thoroughly loved. Although the queue was long, the food was absolutely worth the wait.

Local youth group, Urban Soul, came down – in force – with the bouncy castle obstacle course and many, many volunteers. They manned the obstacle course, painted faces and played basketball, hopscotch, hula-hoop games, to name but a few, with the children. The children would not have had such a high level of engagement and gameplay without Urban Soul’s participation. We cannot thank them enough!

Although there was a bit of a hiccup with the venue for the magic show, Magic Martha delivered the show, al-fresco, which turned out better for the small children and added to the atmosphere of the event as it sprawled out from the Home monument. Martha puts on a great show, the children love it! Martha really knows how to hold a crowd, make them smile and laugh out loud!

The community was out, en masse, with help for the setup and running of the event. We had volunteers help us setup, with games and with music. Thanks to the community volunteers, the overall event went off without a hitch! Gerard O’Neil donated his time and DJ equipment and a number of community members took part with singing and dancing.

And in the end, the event was taken down quicker than it went up. We had the space cleared in under half an hour thanks to the army of volunteers. Now that it’s over, we’re already planning for next year 🙂

Every participant brought their best game and gave the event 110% effort, and for that we cannot thank everyone enough. That being said, none of it would have been possible without the huge support of Cluid Housing and Dublin City Council and the very gracious donation from the Croke Park Community Fund. Together however, we put on a fantastic day that will hopefully go down in memory as a great day in the summer of 2017.

“Community street party in front of the HOPE office, August 2017”